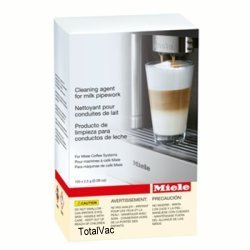 This powder cleaner will remove any milk residue within the milk pipework to prevent the coffee system's milk supply lines from clogging. Miele recommends cleaning the lines at the end of the day. Helps maintain the lifespan of your machine. Contains 100 cleaning packets.